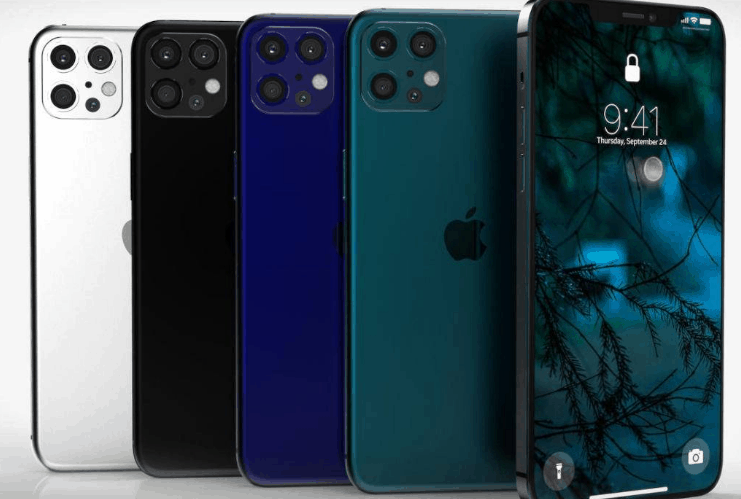 Have you ever wondered about the philosophy behind the iPhone design? It’s the relentless efforts of Apple towards simplifying and improving mechanical components, offering you an austere window on your life that you tend to live through your device. This idea is further driven by the iPhone 12 2020 with a few iterations to be the purest incarnation of the iPhone: a gorgeous and sleek display entirely made up of glass! With the radical changes of “no charging port,” and “air pods” Apple and others want us to experience the wire-free world. Discarding the home button for the sake of good, iPhones are definitely progressing in terms of technology. Galaxy S8 from Samsung also ditched the use of the home button to favor the replacement of the physical with a virtual one. Vivo was the first to integrate a fingerprint reader into the screen. Be it any brand, the trends are just on the rise.

On the other hand, there are few features that set Apple apart from the rest of the other brands. And undoubtedly, the future holds so much for the iPhone in technology terms. When Apple announced iPhone X with no home button, it felt like a big caveat! Cultivating such changes, it still is an iPhone—a brand that you can trust and expect surprises from when it comes to technology upgrades. To sustain the curiosity and excitement, the idea of newness can’t be compromised! So what are all those features that can keep your excitement high in the year 2020? Discover them all below!

If you are impressed by the top-notch iPhone 11, iPhone 11 Pro, and iPhone 11 Pro Max, then you must be waiting for the iPhone 12 in the year 2020. Recently, in 2019, Apple unveiled the iPhone 11 series in the USA and in other countries around the world. Now that the new series is out, Apple retailers are slashing the prices of older models of iPhones. However, the iPhone XS, iPhone XS Max, and iPhone XR are still fairly expensive, but the former flagship can surely save some money. While some users seem to be doing fine with the older versions of iPhone, the tech-savvy can’t wait to get their hands on the newest iPhone 2020. With the progressive history of the iPhone Repair, it is never going to let your expectations down. There are certainly a much bigger set of changes awaited, in case you are not impressed with the iPhone 11 series. With the iPhone 2020 iPhone models, you can expect reportedly great features of 3D camera capabilities, OLED screens across the board, 5G support, display upgrades, faster processors, and a newer design that will include some changes in the layout.

Rumor has it Apple is also planning to release some budget-friendly 4.7” iPhones in the spring of the year 2020. They would presumably be called the iPhone SE 2, iPhone 8s, or iPhone 9. Several 5g powered 5G Androids were launched in 2019, but iPhone owners will have to wait until later this year for the same capabilities. 5G services have already started in the USA and some other regions around the world. As we push into 2020, 5G service is starting up in the United States and other regions around the world.

There are rumors that the iPhone 2020 might come with faster 120Hz ‘ProMotion’ displays. Some reliable sources claim that Apple is, as of right now, considering a switchable 60Hz/120Hz refresh rate screen on the iPhone in the year 2020 and this is what currently being discussed with LG and Samsung. The faster refresh rate will serve you with an even smoother experience. You can expect more fluid scrolling and better responsiveness, and faster motion on the display. Also, if the reports by Digitimes, are to be believed, then the iPhone 2020 will come with a 120Hz screen. If you are someone who gets irritated by slower phones, then you can wait for better displays and refresh rate in the upcoming iPhone 2020. However, if we bring the iPhone 11 Pro and iPhone Pro Max into the discussion, they both have some of the most beautiful OLED displays ever made in the history of iPhone while the cheaper, more colorful iPhone 11 has an LCD display. And you can expect the scenario to change in 2020. The Wall Street Journal stated that Apple is planning to ditch the LCD display in 2020, and make use of the OLED panels across the board. If we peek into the history, the users were satisfied with the iPhone 11’s LCD display. However, OLED is the clear winner when it comes to the comparison of the two.

Thinking to buy an iPhone in 2020? Well, then get ready to contend with a notch on the display. Back in 2017 when iPhone tried to make the notch just like iPhone X, Apple had to face the rage of the users! Why? Because, the notch houses important sensors and people found it intrusive as there was no anticipation. Despite the ire of the users, the company is constantly looking to slim down/eliminate the notch on 2020 iPhone models. So, if you yourself are not a fan of the notch, you should await the arrival of the iPhone 2020. Leaker Ben Geskin claims ”Apple is currently testing different Face ID prototypes that could allow the company to use a smaller notch on the 2020 iPhone models.“ According to Ming-Chi Kuo (analyst), at least one 2020 iPhone will come with a smaller front camera lens that could lead to a slimmer notch. If rumors are to be believed, Apple is consistently exploring ways to combine Face ID and the front-facing camera so that the size of the notch can be reduced.

AMS (Apple supplier) has announced new sensor technology to help the company bring a smaller notch on the newer iPhones. David Moon, Senior Marketing Manager at AMS said: “Smartphone OEMs today are striving to maximize their products’ screen-to-body ratio, reducing the bezel area as much as possible on the display’s face,” and “The TCS3701 enables phone designers to take this trend to a new level, potentially eliminating the bezel entirely.” According to Digitimes publications, you can also expect to see smaller screens in the year 2020 as Apple is working on three new iPhones that are smaller, and larger, than the present models. The website also claims that Apple is all set to launch three OLED iPhones in 2020 with screen sizes measuring 5.42-inches, 6.06 inches and 6.67 inches.

According to Bloomberg, Apple is all aboard to incorporate laser-powered 3D cameras on the iPhone, resulting in improvements of the Augmented Reality (AR) on the iPhone. Mark Gurman of Bloomberg said that the new 3D camera on the iPhone will give a better sense to the iPhone in physical space and users can expect improvement in the accuracy of object placement in augmented-reality apps that will overlay virtual images on the real world. Samik Chatterjee from JP Morgan analysis nods in a positive way to these rumors. A report from Digitimes and Ming-Chi Kuo also believe so. Kuo also stated that if Apple launches three models of iPhone in 2020, two out of three will feature this technology. According to Gurman, the new 3D camera system will be installed in the iPad Pro series too, before the iPhone later in 2020. There are also rumors that the iPhone 2020 models could be seen with optical image stabilization in the sensors of all three rear cameras. Not to mention you can expect better picture quality all around.

It’s not all rumors! Keeping the iPhone history and progressive technology in perspective, it is sheer anticipation. Hence, there are reports and hearsay that imply that Apple is going to install new chips inside the 2020 iPhones. Recently, TSMC has confirmed the release of its 5nm chip design, creating favorable circumstances for the A14 processor. Production is expected to start in the second quarter. Mark Gurman from Bloomberg claims the iPhone 2020 models will feature “a much more robust processor” that implies we can expect some big improvements to battery life and speed. A report from Korean website “The Elec” proposes that Apple will be using a battery protection module that will be approximately 50% smaller and thinner than ones used in preceding iPhones.

Apple devices not only bring satisfaction, but they face no comparison when it comes to their unmatched features. Apple has surely extended its dominion over both markets – ecommerce and the worldwide market of digital-electronic gadgets. With the technological advancement in the progression, your anticipation and desires for the best will never be compromised.