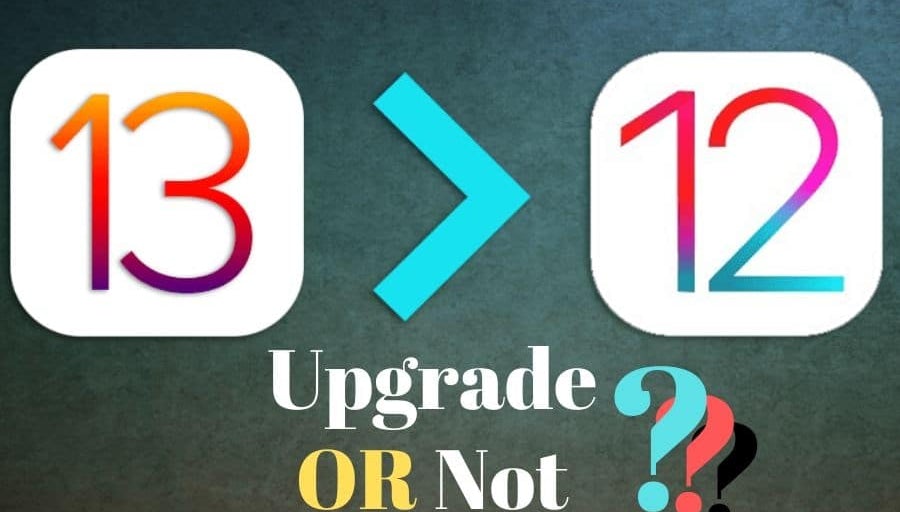 Apple has launched its all-new operating system to bring a wealth of many new features that will entice you right away! This operating offers its users the facility of dark mode for the very first time in the history of Apple innovations. In the blog below, we are comparing iOS 12 to iOS 13 to help you decide whether you should update your phone or not!

WHAT VERSIONS OF THE IPHONE, IPODS, AND IPADS CAN UPDATE TO IOS 13?

As Apple keeps its promise of launching a device with all-new features each year, the year 2019 has also seen an update in features like design and interface. Though the appearance of iOS 12 and iOS 13 devices is so similar one can’t even tell the difference, the internal functioning has been changed! The appearance is not a big surprise keeping in mind the reaction of the users to the aesthetic overhaul of iOS7 in the year 2013.

In the case of iOS 13, you will find many changes in the interface when you deeply explore on iPhone Repair. It has incorporated the most awaited ‘Dark Mode.’ The Dark Mode applies to all the systems, especially in the first-party apps (effects can be seen in the maps, mails, notes, music, messages, home, photos, reminders, calendar, etc.). For third-party apps, developers are required to build in compatibility with features on their own, but it is assured that all apps will be in-tune with dark mode.

So, why is that the users have been asking for Dark Mode for so long? Maybe because it is one cool feature that Apple has been lagging at! So, Apple acknowledged this interest of its users, and this year worked towards it. The dark mode also serves an excellent purpose for the people who tend to spend a lot of time on their iPhones at night with their eyes wide open. It offers a restful interface at night. Also, for the drivers who drive at night, Google Maps with dark mode will soothe their phone usage experience. You will have to set that feature manually as per your requirement in the daytime or nighttime. Apple has also redesigned the interface of some apps that used to be confusing earlier.

Now, they are revamped with smarter lists, a better layout, and organization options. It has also changed the feature of tagging that syncs with Messages for further collaboration. Notes have also seen a revamping of the interface, including its great gallery view, mail also supports opulent fonts, and Safari makes it easier to change text size. Lastly, there are extra options of customization available for Memoji that include piercing, makeup, and more hairstyles and hats.

Design and interface were all about visual differences, what about speed? Is it the same, or has it been upgraded? It is a known fact that iOS 12 was a big leap forward in terms of speed and stability, mainly for older versions. But Apple aims to crank the accelerator up yet again with the iOS 13 update.

These kinds of advancements are apparent anticipation; obviously, a newer version of an operating system will be faster than the last one! Though the case wasn’t so earlier, most of the iPhone users have suffered a significant slow operating system after updating iOS, as the flashy new features of the recently launched OS were more demanding. The intent for designing such flashy features is that these newly developed features can be run on more modern hardware. Here the case is refreshing from iOS 12 to iOS 13.

WHAT ARE THE PROMISING CHANGES IN TERMS OF PERFORMANCE OR SPEED?

For now, it is better to assume that these features and percentage changes apply to the optimal scenario. It is presumed as the best situation because the exact combination of software and hardware produces the most significant difference. So don’t always expect a considerable advance; it is more helpful that Apple is aiming at performance and on new features with similar interests.

We are familiar with this standard option within any web service or in any app. We were asked to log in using our pre-existing Facebook/Twitter account over a new service-specific log-in creation. Apple is all set to ace this game with the new sign-in feature of allowing the users to log-in with the Apple ID option. This feature sounds great from a user perspective! When an app asks for a log-in, it serves you with advantages—it can remember your preferences, searches, and customization. For instance – having a separate log-in and remembering passwords for each app can be a pain.

Therefore, using this unified log-in works as an advanced feature that will save you a lot of time. Meanwhile, Apple has a good reputation for the user’s privacy that assures us that data collection is limited to the user’s email address and name. It feels like the company won’t sell your data on to advertisers as other tech companies do. Also, Apple doesn’t need to because its business model is built on $999 monitor stands, not data collection.

If you are an app developer, this option is less thrilling because it requires extra development work, for the short term, at least; for more extended periods, some devices save times and may stop bothering to do their log-in mechanism. Those who rely on user data to bring about revenue through user log-ins may require changing their business terms.

It may involve switching from a free to a paid-for model. Kindly, note that, while this feature is included in iOS 13 update, this is a factor that should affect users on iOS 12 too (even the previous ones). This implies that if you update even a single app once, and the developer has added sign-in with Apple, you are bound to get it whether you have iOS 13 or not.

Back in 2014, when iOS 8 got updated, Apple allowed its users to install third-party keyboards, and one of the most significant features that caught focus was Swipe Typing. It offered you an advantage that instead of tapping individual alphabets and lifting your fingers off the keyboard, Swipe lets you swipe directly across the screen from letter to letter in an uninterrupted motion. Though the user might take a little while to get used to it, it is faster and more efficient than the traditional touchscreen keyboard.

Also, this feature was discontinued in 2018, but it has now returned with iOS 13 keyboards as an integrated and optional feature. This feature is welcomed wholeheartedly, but it is worth noting that Android launched this amazing feature back in 2013.

SO, SHOULD YOU UPDATE YOUR IPHONE TO IOS 13?

You indeed get a bunch of new features that help welcome iOS 13 wholeheartedly. But, you may find out that updating your older iOS to iOS 13 may lead to incompatibility of apps on this newest version of iOS. Features have been upgraded indeed, but if you are looking for any drastic visual redesign, then you might face disappointment. Also, if you are looking for two columns—one full of pros and another empty of cons, then it is also not the case.

For the newest devices that are coming with iOS 13, it is exquisite! But, for the older machines, if you are thinking of updating your current iOS to iOS 13, then you will want to revise your decision because it may change the way how your iPhone performs. People who are running an iPhone 7 or later versions, it is recommended to update your iPhone to iOS 13. But those who are running previous versions, you should revise your decision by getting reviews from others who already use it or have updated their iPhones.

If you are very keen on trying out iOS 13, ensure that you go for the public beta that is available to you without any fee. With this, you will have to wait slightly longer, but it’s all worth it!