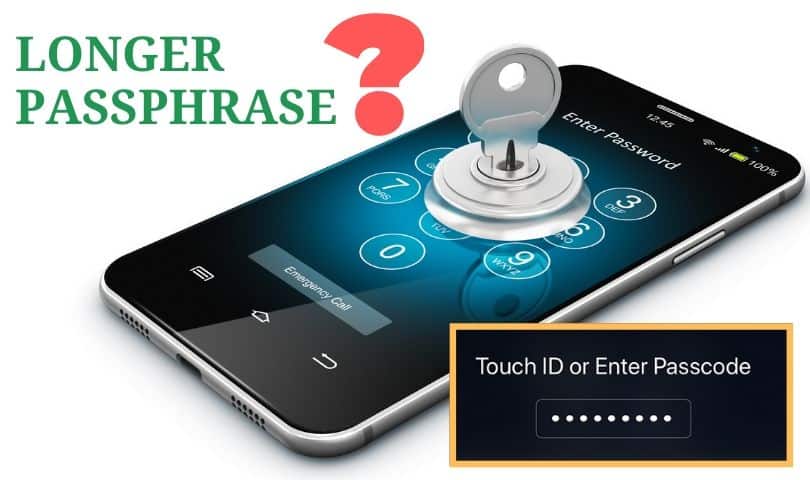 No wonder, iPhones have acquired a reputation of being notoriously secure, and this is the reason that it is gaining increasing popularity among the audience. The iPhone users are significantly increasing every year due to the increasing trust of the people on the security offered by Apple in the iPhones. But it is important that you don’t let this reputation of iPhone lull you into believing the false sense of security.

There’s no such fact that the data on the iPhone is completely secure, and that is why we can say that the iPhone does not give any guarantee of invulnerability. Even though Apple keeps enhancing the security levels with each new version of their product, but still there isn’t any surety of being completely safe from any data loss or attack on it. Although Apple keeps on trying to come up with the best ways to secure your data on the device, all of that security will go useless if you are following poor cyber security habits and are responsible for the compromise yourself. To ensure that your data stays safe on iPhone and it acts as a digital fortress which it should be, consider following the below-mentioned safety tips:

1. USE A LONG PASSPHRASE

Most people who use an iPhone consider setting their four-digit PIN code. Sometimes they can consider going slightly more secure by using a six-digit PIN for security their phones. To all the users, it seems to be the perfect protection plan offered by Apple as the phone will keeping locking itself down for the increasing duration if any unauthorized person tries to gain access to the iPhone and unlock it with the wrong code for too many times. It depends on your settings, but mostly, it erases itself after there are 10 incorrect tries of entering the passcode.

Did you ever take time to think about what could actually go wrong in such situations? From the 10,000 combinations of letters for the passcode, the person who is trying to attack the phone would have to guess the correct passcode in the first 10 tries. We can say that the chances of the attackers cracking the passcode in these 10 attempts are very low, one in 1,000. When you use the six digits, the password just increases the odds a little further. But the truth is no hacker these days would just be poking numbers on the screen to crack the passcode and get into the phone. The hackers have gone smart, and they all are aware of the different devices which are used for retrying PIN numbers endlessly, without any penalties, which generally happens by taking advantage of the loopholes in the hardware or software in the iPhone. GrayKey device is one of the latest of these devices through which an attacker can crack a four-digit passcode in one or two hours and also cracks the six-digit PIN in a maximum of three days. Though Touch ID and Face ID are the convenient options of opening the phones through your identity but still that won’t act as the security feature. What you need to consider here is to keep longer passcode through which cracking it becomes more difficult and time-taking.

One of the important ways to stay secure from the security threats is to keep your system and the apps updated. Apple keeps giving frequent updated of iOS by fixing any detected vulnerability it in. Such vulnerabilities, when detected, can be used by the attacker to get into your iPhone. Some of those issues could be minor ones, but some could be really major ones that can open up your iPhone to a lot of threats and damages. Apple has been doing a great job in quickly detecting the vulnerabilities and security loopholes with each software update and tries the best to overcome it with the next version of iOS. But even if Apple keeps on bringing the next updates, that all won’t prove to be effective until you keep updating your iOS version. So, if you want to prevent the hackers from attacking your iPhone, it’s your responsibility to regularly update the iOS version so your iPhone can get over all the possible vulnerabilities associated with the previous version.

3. USE 2FA TO LOCK DOWN YOUR APPLE ID

Most of you must be confused about what 2FA is. Well, though, it seems to be a funny abbreviation, but it is very helpful in keeping your iPhone safe from any vulnerability. 2FA stands for two-factor authentication. This is a means of authentication which not only needs something that you are aware of, like setting a password, but with an added level of security that you might not know, like the temporary OTP. Until and unless the attacker has both of these aspects, it will not be possible for him to access your account.The keys to the kingdom are basically your Apple ID. It is connected to every device that you own. Your Apple ID, which is securing your iCloud account, would definitely be having a lot of tempting information for the hackers, which makes them more attracted to the information related to you. Fortunately, Apple offers you the feature of 2FA on your Apple ID, which makes it easier to save your account, and thus, this measure of data security is strongly recommended. When you are active with the feature of 2FA, it could mean that whenever one has to access your Apple account, it will ask for the password and the other six digits code that will be sent to your trusted device. After entering both, access to the account would be granted. Thus, when you have the feature of two-factor authentication activated with your Apple account, it will make it difficult for the hacker to access your Apple ID and acquire your personal data through it.

Encryption on the iPhone is known to be one of the finest features, but the other fact is that it is not perfect. Until and unless there remains the chance of cracking the passcode of your iPhone or acquiring access to the backups with are unencrypted, your data would always stay vulnerable. When it is about keeping your sensitive information, including the social security number, passwords, and financial details safe, you need to count on to the feature of additional encryption.

You can consider using a password manager and acquire its strong encryption along with a strong password, which is different from all your previously used passwords. This method can be extremely helpful in keeping your data secure. Also, you can consider using the feature of the vault in your iCloud, so when the hacker would be working on cracking the passcode of your iCloud, he would then also work again to break the vault to find your information. Along with this, Apple’s own Notes app helps in allowing the users to create encrypted notes that will stay secured with the help of a password that you’ll choose. So, when you are using a strong and unique combination of letters for a password that will secure your data in the notes. Next, when it is about iPhone backups, you can use iTunes for backing up the data. Here you can consider it setting iTunes to encrypt those backups. This kind of encryption will make use of a different password; thus, it is important for you to set a strong password to ensure complete protection of your backup.

5. MAKE USE OF VPN WHILE YOU USE FREE WI-FI

No wonder free public Wi-Fi can excite you a lot, but the truth is that it can be no less than a trap to acquire access to the data on your iPhone. You should be aware of the fact that public Wi-Fi can be very dangerous to your data on your phone. Anyone who is connected to the same network could be able to see any unencrypted network transmission which you make. You never know there could be untrustworthy networks that can perform the different kinds of man-in-the-middle attacks, which can conduct the attacks like phishing or any other malicious activity to acquire unauthenticated access to your data.

Though you can use your cellular data when in public, sometimes it won’t be feasible because of the data caps on many of the data plans. But, there’s another way out to it. You can consider using a VPN or Virtual Private Network that will help in tunneling your network traffic through an encrypted connection to a server which is located at some other place. But in this case, too, you should be aware that there are many untrustworthy VPNs that would not be helpful. So, you need to work a little to find a secure and trustworthy VPN before connecting to public Wi-Fi. There are always safety concerns, even when you use the latest iPhone models. If you want to save yourself from being the victim of cyber attacks, it is important to stay aware and conscious about the iPhone Repair and different ways to enhance the security levels on your iPhone to be sure that your personal and sensitive data does not go into the hands of any unauthorized person.